Question 1
You have a DNS server named Server1 that runs Windows Server 2016. Server 1 has a forward lookup scope for Contoso.com. The records in the zone are shown in the exhibit. (Click the Exhibit button.)
Exhibit:

You run the following commands on Server1. 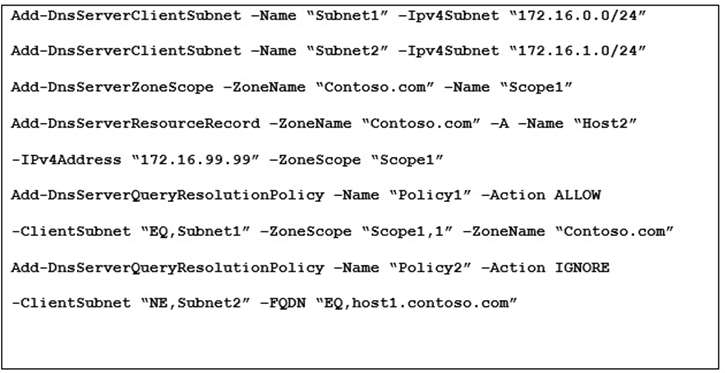 What are two results of the configuration? Each correct answer presents a complete solution. NOTE: Each correct selection is worth one point.

Question 2
Your network contains an Active Directory forest named contoso.com. The forest contains the VPN servers configured as shown in the following table. 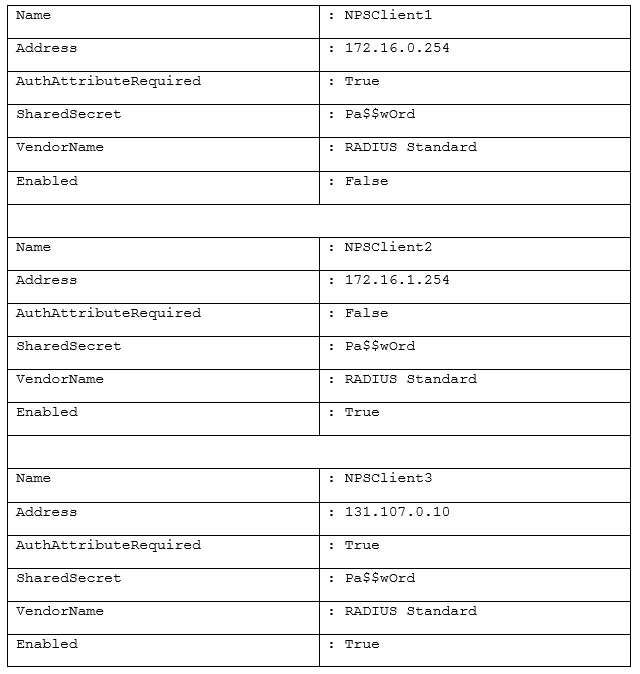 All three VPN servers are configured to use Server1 for RADIUS authentication. All of the users in comtoso.com are allowed to establish a VPN connection. For each of the following statements, select YES if the statement is true. Otherwise, select No.
NOTE: Each correct selection is worth one point.

Question 3
You have a server named Server1 that runs Windows Server 2016. Server1 will be used as a VPN server. You need to configure Server1 to support VPN Reconnect.
Which VPN protocol should you use?

Correct Answer: B
VPN Reconnect, which requires the VPN server to be set up on Windows Server 2016, uses the Internet Key Exchange v2 (IKEv2) tunneling protocol with a MOBIKE extension. MOBIKE prevents disconnected VPN clients from having to perform IKEv2 renegotiation once Internet connectivity with the VPN server has been reestablished.
More information about VPN Reconnect, please refer to the following article:
Reference: https://technet.microsoft.com/en-us/library/dd637803(v=ws.10).aspx

Question 5
Your network contains an Active Directory domain named contoso.com. The domain contains a Hyper-V host.
You are deploying Software Defined Network (SDN) by using Windows Server 2016.
You deploy a virtual machine that runs Windows Server 2016, and you install the Network Controller server role.
You need to configure the virtual machine as the network controller.
What should you do?

Question 6
You have a Nano Server that has one network interface. The server is configured to obtain an IP address automatically.
You need to configure the server to have the following IP configurations:
IP address: 172.16.3.100
Default gateway: 172.16.3.1
Subnet mask: 255.255.255.0
What command should you run? To answer, select the appropriate options in the answer area.

Question 7
Note: This question is part of a series of questions that use the same or similar answer choices. An answer choice may be correct for more than one question in the series. Each question is independent of the other questions in this series. Information and details provided in a question apply only to that question.
Your company has five departments, including a web research department.
You have a DHCP server named Server1 and two DNS servers named DNS1 and DNS2.
Server1 has an Ipv4 scope named Scope1. All client computers are configured to use DNS1 for name resolution.
You need to ensure that users in the web research department use DNS2 for name resolution.
What should you do on Server1?

Your network contains an Active Directory domain named contoso.com. The functional level of the domain is Windows Server 2012.
The network uses an address space of 192.168.0.0/16 and contains multiple subnets.
The network is not connected to the Internet.
The domain contains three servers configured as shown in the following table.

Client computers obtain TCP/IP settings from Server3.
You add a second network adapter to Server2. You connect the new network adapter to the Internet. You install the Routing role service on Server2.
Server1 has four DNS zones configured as shown in the following table.

You need to ensure that when computers query for records in tailspintoys.com, the query results are based on the subnet of the computer that generates the query.
What should you do?

Question 9
You have an IP Address Management (IPAM) server named Server1 that runs Windows Server 2016. You have five DHCP servers. Server1 manages all of the DHCP servers.
On Server1, an administrator uses Purge Event Catalog Data to remove all of the events from the last 30 days.
You need to view all of these lease requests that were denied during the last two days.
What should you do?

Question 10
Note: This question is part of a series of questions that present the same scenario. Each question in the series contains a unique solution that might meet the stated goals. Some question sets might have more than one correct solution, while others might not have a correct solution.
After you answer a question in this section, you will NOT be able to return to it. As a result, these questions will not appear in the review screen.
You have a server named Server1 that runs Windows Server 2016. Server1 is configured as a VPN server.
Server1 is configured to allow domain users to establish VPN connections from 06:00 to 18:00, every day of the week.
You need to ensure that domain users can establish VPN connections only between Monday and Friday.
Solution: From Network Policy Server, you modify the Network Policies on Server1.
Does this meet the goal?